Skip to content
The relationship between the performer and the digital camera has a rich and complex history. The role that the camera plays, not only in the documentation of training and performance, but also in the creation and manipulation of live work is evolving rapidly due to technological advancements, especially with high functioning, unobtrusive, audio-visual recording systems.

The camera can (almost) record it all, documenting the successes, the failings, the blood, sweat and tears of performance-making and training. Only in the post-production process do the cuts come in, which usually means discarding the gritty, messy, reality of the process – the guts of the work – to forge a polished, final product.

In the A-Z project, we placed the camera and the actor together in the studio, as equal participants in the process, co-performing in dialogue, negotiating the space and the material together. Some elements of a ‘point and shoot’ set-up made it to the final cut, but mostly the lens was a great deal more inquisitive and active.

We did not have a typical video production schedule and process either. We were working within tight time frames, with limited equipment, exploiting these challenges to find a method and structure that would mirror the reality of our trainer/trainee processes in real time, with both camera and performer figuring things out along the way.

How did it feel to be recorded during training?

I would usually be much more aware of being filmed, whereas in the A-Z project for the most part this became a seamless aspect of the process. For me, it was fascinating how much of an embodied filming experience it was, rather than feeling that we were ‘presenting’ something to the camera, to be recorded. Through the Digital Studios I got to experience different ways of observing the body; for example, noticing where an impulse came from when filming it from the perspective of a GoPro. 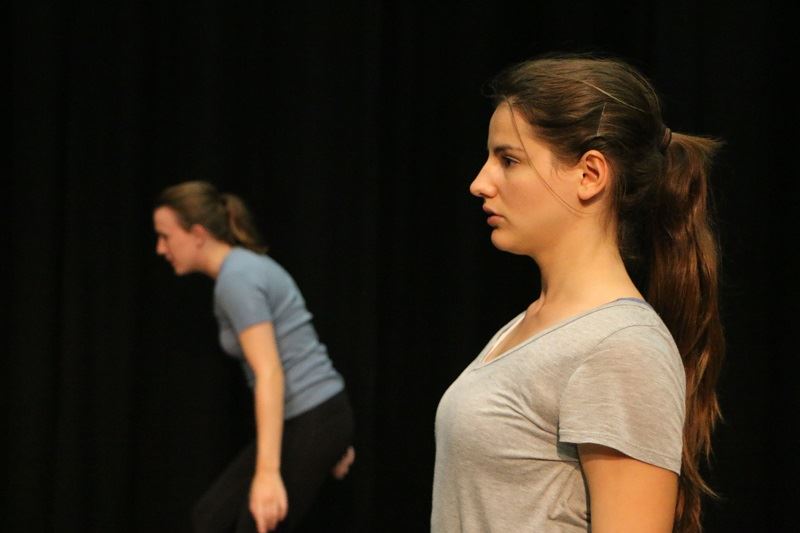 Why do you think we were filming like this?

Rather than thinking ‘How can I demonstrate this practice so that it can be copied or followed?’, it was a process of forming a new relationship with the audience to help them experience it along with you. We ventured into exploring ways of capturing the feeling of the work as much as Paul or Frank’s step-by-step guidance. As trainee actors, we questioned which senses each particular exercise focused on, to then communicate that to the camera through a detailed investigation with and in our bodies.

Did your relationship with the camera alter in the process?

The fact that Stacie filmed mostly up close meant that her understanding of the work – especially as she is a dancer – made the relationship between actor and camera flow. She attuned herself to the rhythm of the physical acting techniques with which we were working. It definitely altered my initial view of the camera as an alien object, where I thought that filming would inevitably impact on how we participated. We were with the camera, with Stacie, co-existing in the space. The camera and its various appendages became something that the actor learnt to work with, just as we experimented with items of clothing, fruit etc. Exploring with the camera encouraged us to find new, interesting things.

Did the work change in any way due to the presence of the camera?

For me, this was strongest in how voice and text were influenced by the camera. We found creative ways to interact and negotiate, manipulating the camera playfully and allowing it to take on a life of its own.

See Technology and Text Work in the A-Z to watch this process in action. 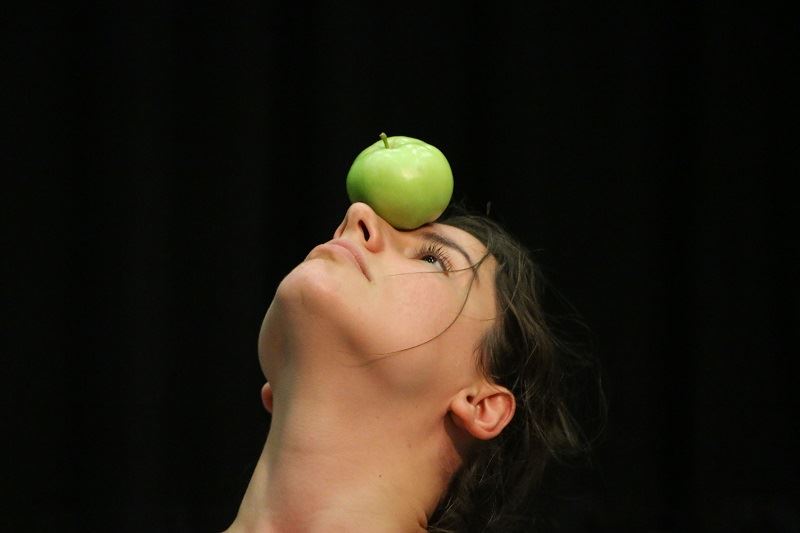